More than 33 years ago, Daniel Kahneman and Amos Tversky, two Israeli psychologists, published their celebrated paper, “Prospect Theory: An Analysis of Decision under Risk,” in the journal Econometrica. In this seminal paper, Kahneman and Tversky explained that people make decisions based on gains and losses arising out of a choice instead of final wealth levels. Since then, the major concepts of prospect theory have been accepted by social scientists as the best available theoretical tools for analysing real-life decision making under risk. Kahneman 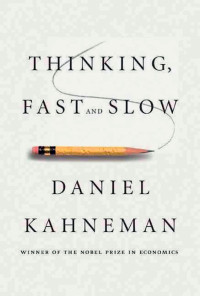 was awarded the 2002 Nobel Memorial Prize in Economic Sciences for his work in prospect theory.

Daniel Kahneman brings his lifelong research on cognitive bias, prospect theory and happiness together in Thinking, Fast and Slow in which he explores several predictable errors in human judgement. He sets the tone early: “So this is my aim … improve the ability to identify and understand errors of judgment and choice, in others and eventually in ourselves, by providing a richer and more precise language to discuss them.”

Divided into five parts with 38 chapters and two original papers reprinted as appendices, the book is intellectually imposing and yet easy to understand. Kahneman cites many examples to lighten the tone and strengthen his arguments.

In the first part of the book titled “Two Systems,” Kahneman introduces us to the two systems that drive the way we think and make choices. System 1 is fast, instinctive and emotional while System 2 is slower, deliberative, logical and endowed with limited resources to monitor System 1. Kahneman shows that System 1, or intuitive thinking, can be biased or even flawed in specific situations. He comments, “When we think of ourselves, we identify with System 2, the conscious, reasoning self that has beliefs, makes choices, and decides what to think about and what to do. Although System 2 believes itself to be where the action is, the  automatic System 1 is the hero of the book.”

In the next four sections, Kahneman explains several facets of human behaviour. Part 2, “Heuristics and Biases,” is dedicated to our tendency to misinterpret statistics, illustrated by situations in which we fail to precisely associate reasonable probabilities to outcomes. The theme of the third section, “Overconfidence,” is how intuitive predictions tend to be overconfident, overly extreme and prone to errors.

The fourth part, “Choices,” focusses on Kahneman and Tversky’s biggest contribution to economics: prospect theory. He discusses the four main elements of prospect theory: reference dependence, loss aversion, diminishing sensitivity and probability weighting. In the final and the shortest section of the book, “Two Selves,” Kahneman elaborates on his current research on happiness, where the two selves are the “experiencing self” and the “remembering self.”

“Thinking, Fast and Slow” is an enlightening book. It is a tome on human psychology and behavioural economics, distinguished by its clarity, moderate views and wit. It encourages readers to question so that there is no theory-induced blindness in social sciences. As a researcher in behavioural finance, I believe it would be interesting to adapt prospect theory to a dynamic context and that we would be well-served to remember Kahneman’s words: “As we navigate our lives, we normally allow ourselves to be guided by impressions and feelings, and the confidence we have in our intuitive beliefs and preferences is usually justified. But not always.”