The Bharti School of Public Policy at the ISB’s Mohali campus hosted Mr Baijayant ‘Jay’ Panda, Member of Parliament (MP), Kendrapara, Odisha on February 15, 2014, for a Policy Workshop. The event was organised in association with Young Indians (Yi), an integral part of the Confederation of Indian Industry (CII), India’s premier business association, formed in the year 2002, with an objective of creating a platform for young Indians to realize the dream of a developed nation.

The emergence of the Aam Aadmi Party (AAP) and its debut in government after the Delhi assembly elections in December 2013 provided an interesting juncture to understand and assess alternative forms of governance in the Indian election milieu, where voters sought an alternative to the mainstream political parties. While there are certain aspects of the AAP’s electoral “triumph” and its subsequent collapse which merit a closer look at the changing nature of political participation and representation, it is equally important to consider the responsibilities and position of the representatives, the MPs and the various challenges they face in policy making and governance.

The workshop was meant to provide a platform for the youth to develop an understanding of important policy issues, the role of MPs, the working of various political offices, approaches to public policy, opportunities in the field and forms of citizen engagement with elected representatives.

The workshop began with an introduction by Mr Panda where he urged the youth to take a keen interest and play a pro-active role in politics and various socio-political processes. He added that he was holding such workshops to meet and interact with the youth- entrepreneurs, professionals, intellectuals, industrialists, students and academicians from across the country who were attempting to contribute to India’s development.

“The aim is to discuss and implement certain small systematic changes and tools which can bring about a lot of change in the near future,” said Panda.

He spoke of how and where citizens can contribute to the country’s governance while assisting MP’s in enhancing practices and processes of good governance. He warned about initiating extreme political changes as well as the ills of non-democratic government, paralleling the current Indian political scenario to the emerging democratic norms of 19th century United States of America.

The first session of the workshop was conducted by Rohit Kumar, Head, Policy Team, Office of Mr Panda. The session explored the theme ‘Understanding Governance Better: Our Constitutional Structure’ and revolved around issues of checks and balances in the distribution of powers and the working of the various forms of government at the local, state and central levels.

Yashita Jhurani and Gaurav Goel, facilitators at Samagra Development Association helmed the next session titled ‘The MP and His People’. They explained about the nature of work and citizen’s engagement in their constituency and the monitoring and review of projects and schemes like the Members of Parliament Local Area Development Scheme (MPLADS).

Professor Matthew Hull, Associate Professor of Anthropology, University of Michigan and Kaushiki Sanyal, Senior Analyst, Bharti School of Public Policy, chaired the following session on ‘Public Policy – Challenges and Opportunities’. They covered approaches to policy through insights from various projects being undertaken at the Bharti Institute of Public Policy and the various opportunities opening up in the field of public policy. 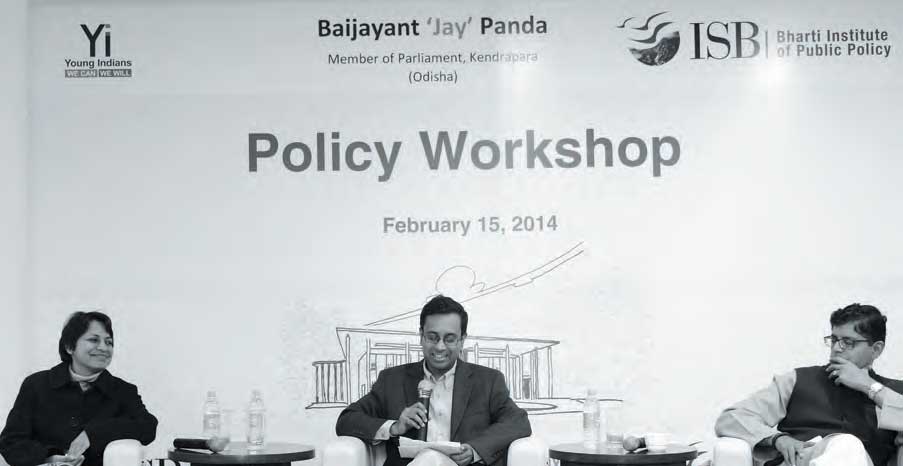 The afternoon session saw Mr Panda explaining to the participants about ‘Important Institutional and Systemic Reforms’ required in India with specific references to federalism, distribution of powers and resources, electoral reforms, parliamentary reforms and judicial reforms.

“There is a dire and urgent need to bring in parliamentary reforms in order to avoid deadlocks on the House floor on various crucial issues and bills, if our nation has to progress as fast as the UK and the US,” Panda said.

The session also saw Mr Panda discuss the issues of electoral funding and the importance of tracing the source of party funds. He highlighted some of the loopholes in the guidelines of contributing to political parties. He also raised issues of selection of candidates for elections, confessing that there was a need for a system where the best candidate could be fielded to contest elections.

Mr Panda also addressed the role of the judiciary, speaking about the self selecting process for the position of judges. He responded candidly to many questions from participants regarding Parliamentary demeanour and practices. He took up the issue of social media and its impact in democratising the political field. While active on Twitter himself and hailing it as a medium which allowed everyone to voice their choices and opinions on a mass platform, Mr Panda was cautious of its impact in the upcoming elections. As a parting note Mr Panda asked every participant to vote and encourage others to vote as well, whether it was for the Parliament or the Assembly Elections. He also exhorted each participant to champion a cause for the betterment of the country.

The final session of the workshop explored the ‘Dynamics of the Interaction between the Legislature and the Executive’ through a conversation between Mr Panda and Ms Vini Mahajan, IAS, Principal Secretary, Health & Family Welfare, Government of Punjab, moderated by Professor Rajesh Chakrabarti, Executive Director, Bharti Institute of Public Policy and Clinical Associate Professor, Indian School of Business. The session delved into various processes of interaction between the bureaucracy and politicians. Instances from their personal experiences added a certain depth to the discussion. Questions were asked on the need for parliamentary politics, on lateral hiring in the civil services especially the foreign services, on the limitations of age while serving in the bureaucracy or in political life and ways in which one could overcome prejudices, biases and corruption while being part of either of the professions.

Over 100 participants from diverse backgrounds attended the workshop. This was the third in the series, after Delhi and Bhubaneswar with workshops scheduled to be conducted in Pune and Bangalore. The direct engagement possible in such workshops provides opportunities to build closer and positive links between politicians and voters.