Literacy for the 21st Century: Reading the Global Business Environment

Thomas Schmidheiny, in conversation with Kavil Ramachandran
in Current Issue, Face to Face

Dr Thomas Schmidheiny, a globally prominent philanthropist and Chairman of Spectrum Value Management, visited the Indian School of Business during the 7th Asian Invitational Conference on Family Business organised in February 2019 by ISB’s Thomas Schmidheiny Centre for Family Enterprise. Professor Kavil Ramachandran, Executive Director of the Schmidheiny Centre for Family Enterprise, caught up with him for a seasoned perspective on the trends shaping the global business landscape.

Kavil Ramachandran: You have led a major multinational corporation for many years with operations across the world and have major investment interests across a spectrum of activities globally. What do you see as some of the major global trends in business and some of the key learnings? Since the 1980s, there have been a lot of positive arguments for the integration of economies through globalisation. Do they still hold?

Thomas Schmidheiny: Actually, globalisation is not a recent phenomenon. Over the past two centuries, we have seen two major waves of globalisation; first during the era of Pax Britannica and later during Pax Americana. During the Pax Britannica period, Britain led a wave of globalisation from about 1800 for 85 years or so. This was followed by a period of instability for about 60 years or so from 1885 when several countries, particularly in Europe, questioned Britain’s leadership. The post Second World War period saw the rise of the United States (US) as the leader of a new wave of globalisation. The quarter-century starting in 1980 or so witnessed a very rapid phase of globalisation. However, the past decade has witnessed a slight slowdown in the pace of globalisation. As Pax Americana comes to an end, we are entering a new phase.1 We are at the inception of a new phase. Perhaps the first few years will be a period of instability until a clear leader emerges. 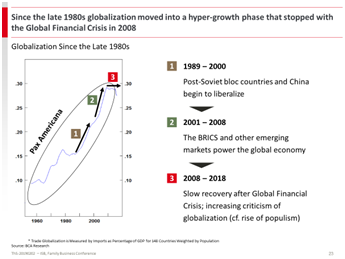 Note: Trade Globalisation is Measured by Imports as Percentage of GDP for 148 Countries Weighted by Population

Given the turbulent environment surrounding globalisation, and growing trade wars among major players, what do you see as possible future scenarios for globalisation?

There are three possible scenarios I can visualise. The first could be the next frontier of globalisation; second, it could be further polarisation. Or third, it could be increased localisation. Let me elaborate on each of these scenarios.

The second scenario describes a return to a bipolar or potentially multipolar world with two dominant powers — the US and China. These are already into a growing major trade war over the past two years or so. However, “two blocs” scenario might be a relatively benign scenario, unlike a multipolar or “islandisation” scenario.

The third scenario revolves around localisation, thanks to innumerable existing and emerging technological possibilities. For instance, major technological progress, such as 3D printing or cellular/lab agriculture, enables localised production, thereby making global production networks obsolete. Already, Adidas has the capability to print their shoes using 3D printing technology. If technology progresses as I expect, globalisation – at least in terms of trading goods – will to a certain degree become obsolete as production will take place where the consumers are.

Who will be the key drivers of change in the future?

City mayors will be the leading problem solvers and change agents of the 21st century.
The paralysis of national politics in many countries has led to a shift of decision power to the local level. Key policy challenges are global in nature but the actions city mayors can take can have a significant impact in view of urbanisation around the globe.

Major technological progress, such as 3D printing or cellular/lab agriculture, enables localised production, thereby making global production networks obsolete. Already, Adidas has the capability to print their shoes using 3D printing technology. If technology progresses as I expect, globalisation – at least in terms of trading goods – will to a certain degree become obsolete as production will take place where the consumers are

From a business perspective, equally, business strategy is now focusing on the social licence to operate.
For decades under the regime of Pax Americana, the business has been all about growth, cost-cutting and efficiency improvement along the value chain. These goals are no longer sufficient. Companies have to become part of their local communities again and drive change at the local level.

What do you consider the most disruptive societal challenges?

A major challenge is the widening gap between the haves and the have-nots. This is one of the biggest challenges in my view. The billions of dollars earned by a very few stands in contrast to the large section of the population neither profiting from globalisation nor from low tax and low interest driven innovations in the financial markets. This can rapidly get explosive as the example of the Gilets Jaunes or the Yellow Vests demonstrates in France.

The second challenge is that the renewables are growing but fossil fuel still dominates. In spite of a global outcry the energy transition will only proceed gradually. New finds keep costs of fossil fuels down. Alternatively, is this a strategy of oil producers to slow the alternatives? That is also possible but difficult to predict.

Third and very scary — climate change is here to stay. According to a recent paper, a one degree Celsius increase in global temperature will translate into 5-10% more precipitation and extreme weather events around the globe.2 The outcry of 16-year-old Greta Thunberg in Davos in 2019 may be a wake-up call.3

The good news is that emerging technologies may solve daunting challenges. Traditional economics and strategic challenges are defined by scarcity. Technological breakthroughs may help to solve society’s most formidable problems such as the interrelated issues of the energy mix and climate change. We will have to make sound political decisions regarding the governance and use of new technologies for society to rapidly trap widespread benefits.

Climate change is here to stay. According to a recent paper, a one degree Celsius increase in global temperature will translate into 5-10% more precipitation and extreme weather events around the globe

Where does business have its most powerful levers to help to shape the future?

First, barriers to international trade will persist and intensify. Populism and protectionism by potentates undermine globalised trade flows. China, for example, is seeking greater self-sufficiency or even technological dominance. Adaptation of supply chains is, therefore, a must.

Second, geopolitics is becoming messier and less stable. A complicated geopolitical realignment which is now taking place between the US, China and Russia has no clear outcome (yet). No leading power exists anymore to promote a stable international system. Will there be long-term damage? Possible, but we don’t know how much it will be.

And last, but not the least, education is lagging and therefore enterprises have to train their people.  Education and its adaptation to the changing needs of today’s world are, in my view, one of the biggest challenges in our world. In emerging markets, it is starting with basic education of the population. In mature countries, it is the re-education of professionals, including elderly people, which will keep sustainable growth alive. Well-educated countries – such as Switzerland with its dual educational system – tend to be more stable. Such an education system is a superb asset in a crazy world. The public sector will be too slow or uninterested. The corruption and selfishness of potentates will govern. Therefore, corporations should move quickly and fill these gaps.

What are the challenges business leaders face? What should a Chief Executive Officer (CEO) do, more specifically?

A typical CEO has to work on multiple fronts such as capital markets, non-governmental organisations, tax issues, regulators at large, the press, social media, compliance, all of which need an immediate response. At the same time, there are a number of more traditional processes to be followed with respect to a number of other areas. These include customers, environment and sustainability, working population, shareholders/ activists, Board of Directors, “new technology”, innovative disruptors and so on.

Given such a turbulent environment, what elements of the culture should a CEO cultivate in an organisation?

Organisations have to spend more time in defining and developing their culture. Some of the core elements of such a culture are always ensuring integrity and fairness, honour and respect for everyone, no ego or arrogance. Be decisive and accountable. Demonstrate commitment and passion. Have fun and lighten up.

Communicate the “right things” to the “right audience”. Lead with good examples. Watch disrupters and digitise as fast as possible. Build intangible capital

My personal leadership principles are: Establish ambition and vision. Align and simplify the organisation.  Empower people and organisations. Have the ability to attract talent and develop new leaders. Create a culture of leadership and permanent learning. There are others that are close to my heart: Communicate the “right things” to the “right audience”. Lead with good examples. Watch disrupters and digitise as fast as possible. Build intangible capital. Commit to a sustainable environment. Comply with rules and regulations; and have zero tolerance for non-compliance. Execution is everything. Finally: stay humble. Be the CEO of your life!

Thomas Schmidheiny is Honorary Chairman and a major stockholder of LafargeHolcim, the Swiss multinational that is the global leader in the manufacture of building materials. Created from the merger of Lafarge and Holcim in 2014, LafargeHolcim employs around 80,000 people in 80 countries. Dr Schmidheiny joined “Holderbank” Financière Glaris Ltd, a company founded by his family, which became Holcim, in 1973.  There he served as Managing Director and Chairman (1978-2001) and Chairman of the Board (1984-2003). He was a member of the Holcim Board of Directors until 2018. Thomas Schmidheiny is also Chairman and Founder of his family office, Spectrum Value Management Ltd, which manages the investments of the Schmidheiny family. Dr Schmidheiny is also a board member and major shareholder of the Grand Resort Bad Ragaz. He received an honorary Doctorate of Business Administration from Tufts University and holds an MBA from IMD. His particular interest is philanthropy: he engages in donations and sponsoring to business schools, arts, education and start-ups through his foundations.

Professor Kavil Ramachandran is the Executive Director of the Thomas Schmidheiny Centre for Family Enterprise at the Indian School of Business. He has specialised in the family business, entrepreneurship and strategy and has over 30 years of experience as an academic at the Indian Institute of Management, Ahmedabad and the Indian School of Business. He has authored/edited seven books and published extensively in reputed Indian and overseas journals. He has served on various advisory committees of the Government of India, World Bank and Securities and Exchange Board of India. His latest book The 10 Commandments for Family Business, published by SAGE in 2015, was widely acclaimed. He has been a pioneer academic entrepreneur, propagating the message of strengthening family business in India and outside. 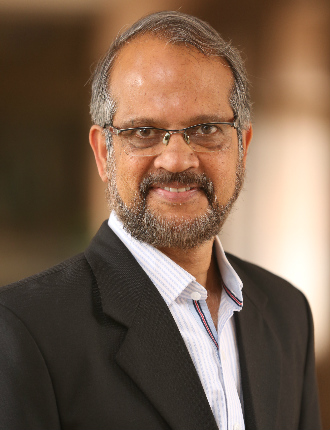 A Corporate History of the Indian Nation