ISB and Industry come together to develop Smart Cities Index

Indian School of Business’s (ISB) Punj Lloyd Institute of Infrastructure Management conducted a two-day workshop to discuss various aspects of the Government of India’s 100 Smart Cities Plan. One of the objectives of the brainstorming at the workshop was also to pave the way for a Smart Cities Index of Indian cities. Gaurav Dubey reports on the proceedings of the workshop that was held at the Mohali Campus of ISB.

India is projected to add 404 million to its urban population by 2050, against its current population of 377 million (as of 2011), effectively more than doubling up the number of people that will live in its cities. They will need to be provided housing, water, employment, education, healthcare, entertainment, and a host of other services so that they can lead a good quality of life. It is in this context that the ISB through the Punj Lloyd Institute of Infrastructure Management has mooted developing a “Smart Cities Index”.

The Institute’s foray into work on smart cities, starting with this research on ranking smart cities, is concordant with the Government’s policy focus and priority on developing “100 smart cities” to meet the challenges of growing urbanisation in India and equipping them to become the engines of economic growth. A Smart Cities Index would help compare cities in terms of the quality of life that people can enjoy in these cities. An index of this nature would not only help compare cities, but also allow investors to decide where they would like to set up business and people to decide where they would like to live.

The purpose of the workshop was to bring together various leaders from the academia and industry that are engaged in different infrastructure sectors to brainstorm on the factors and indicators that would go into such an index. The workshop was attended by an optimal mix of top leaders and participants from corporate entities such as Infrastructure Leasing and Financial Services (IL&FS), Punj Lloyd Group and Solar Energy India Private Limited, Industry Associations such as Confederation of Indian Industry (CII), Multilateral agencies such as the World Bank, NGOs such as Embarq and think-tanks / academic institutions such as the National Institute of Urban Affairs (NIUA), CEPT University, Institute of Urban Transport (IUT), Future Cities, C-Quest, Next Wave Global Solutions and NICMAR, in addition to participants from the Bharti Institute of Public Policy and Max Institute of Healthcare Management of ISB.

The workshop began with a short presentation and briefing by Dr O P Agarwal (Executive Director, Punj Lloyd Institute of Infrastructure Management) on the context and purpose of developing the “smart cities index”. He pointed out that while there is no consistent definition of a smart city, there is a need to find a definition that is relevant to the Indian context and needs, and the index itself can contribute to attaining that contextualised definition. Thereafter, the participants were split into groups and taken through stages to brainstorm and come up with the broad aspects, characteristics and indicators that would go into the index.

The participants took due cognisance of the fact that globally various versions of a “smart cities index” exist, and that it would be desirable to have a certain degree of conformity with other global smart city indexing frameworks while also necessary to have locally contextualised indicators. The conformity 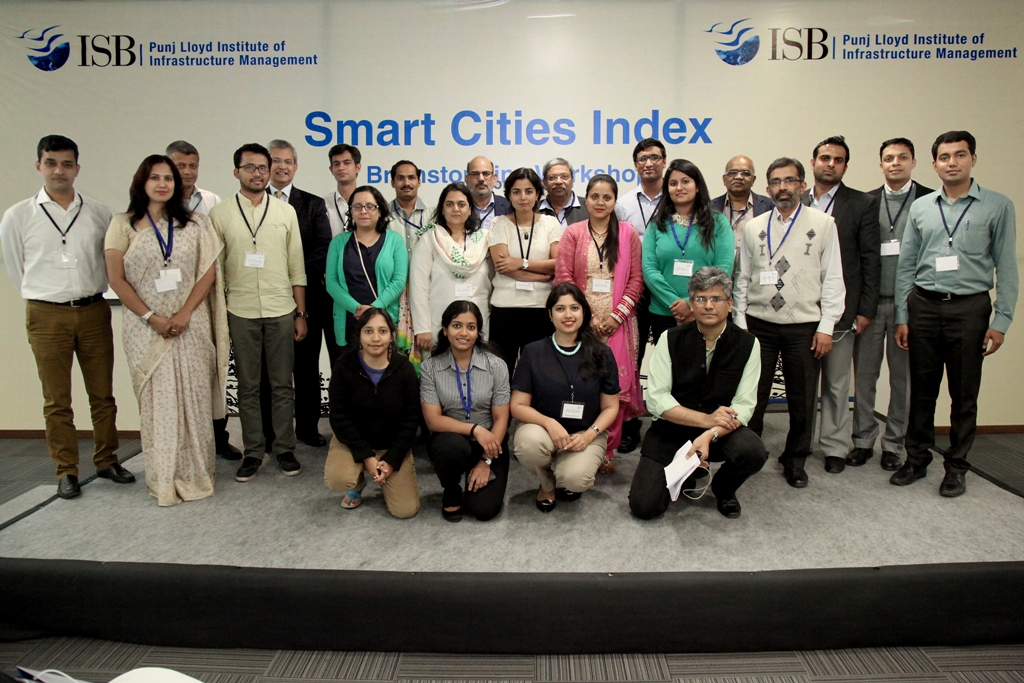 is desirable for compatibility with global indexing systems of smart cities while the contextualisation is critical to reflect the needs and conditions of Indian cities. Therefore, in keeping with Boyd Cohen’s smart cities index endorsed by the Smart Cities Council as well as an earlier study that ranked smart cities in Europe2, six broad aspects of a smart city were agreed upon through extensive deliberations. These aspects are “smart economy”, “smart living”, “smart people”, “smart governance”, “smart mobility” and “smart environment”.

The groups concurred on the point that availability and quality of data may in part determine the indicators that are chosen to measure each of the characteristics for the six aspects as explained above. It was however, agreed that a generic user perception/ satisfaction survey could be conducted to plug data gaps.

In keeping with Boyd Cohen’s smart cities index endorsed by the Smart Cities Council as well as an earlier study that ranked smart cities in Europe, six broad aspects of a smart city were agreed upon through extensive deliberations. These aspects are “smart economy”, “smart living”, “smart people”, “smart governance”, “smart mobility” and “smart environment”.

The workshop concluded with an action plan that comprised the following basic points of action: