Economy And the New Government: The Road Ahead

Leading academics and socio-economic analysts took part in a panel discussion on the new government’s economic agenda jointly hosted by the Bharti Institute of Public Policy at the Indian School of Business in association with the Oxford University Press.

Following the National Democratic Alliance victory in the recently concluded general elections, the new government will face renewed expectations with regard to reforms and governance. The incoming Narendra Modi led Government’s first litmus test in the immediate term would be the Union Budget 2014, due to be presented within the next couple of months. While the BJP’s election manifesto called for boosting economic growth and promises revival of the Indian economy, the exact contours of the new government’s economic agenda are yet to be articulated. In this context, the Bharti Institute of Public Policy at the Indian School of Business in association with the Oxford University Press organised a panel discussion on the ‘Economic Agenda of the Next Government of India’ on May 10, 2014 at the School’s Mohali campus. 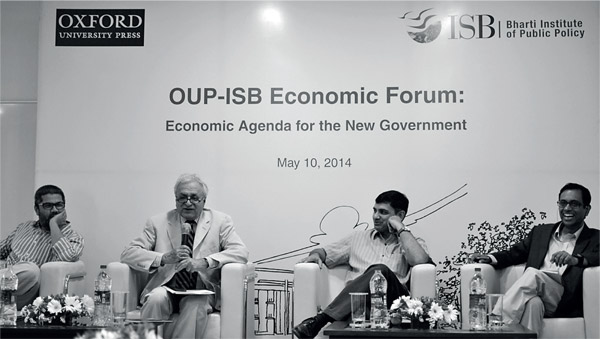 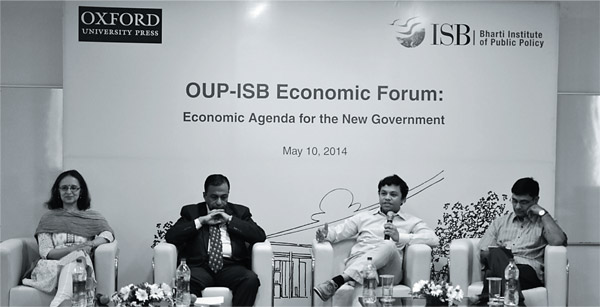 In providing an in-depth analysis of what the government needs to fix in the long and short term, Dr Goyal commented that the government needed to better the reach of subsidies to sections which needed it most. Emphasising the need to hold the government accountable, she suggested that well-defined metrics to measure outcomes of government policies had to be developed. In addition, she also spoke about the need for reforms in the coal sector as well as administrative reforms. She further emphasised the need for States to have better co-ordination among them and the need for a number of instruments to increase financial savings that would counter inflationary pressures.

Professor Debnath discussed the need to enhance competitiveness in the export sector. He also highlighted the urgent need for rationalising labour policies which constrain the industrial sector. According to Dr Chaddha, the incoming government needed to focus on confidence building measures in governance in the first few months. He suggested that it was important to bring about a blue collar revolution in the manufacturing sector as well as allow foreign direct investment (FDI) in the retail sector.