Corporate Social Responsibility And the Rise of Social Entrepreneurship

At a recent workshop organised by the Bharti Institute of Public Policy at the Indian School of Business, companies and social enterprises came together to deepen the understanding of CSR and the role of companies in transforming the socio-economic landscape in India.

The Bharti Institute of Public Policy (BIPP) at the Indian School of Business (ISB) joined hands with the British Deputy High Commission, Hyderabad, to organise, in partnership with UnLtd Hyderabad and Next Gen, a workshop on the theme ‘Corporate Social Responsibility and the Rise of Social Entrepreneurship’. The workshop aimed to deepen the understanding of CSR and its connection with Social Entrepreneurship. It highlighted the role of companies in transforming the socio-economic landscape in India through CSR. The workshop provided a much needed common platform for companies and social enterprises to learn from examples of successful partnerships to create social impact.

The panel discussions were aimed at sharing insights on the evolution of social enterprise in the UK and India, significance of linking corporate social responsibility to a company’s mainstream activities, the corporate social responsibility rules under the new Companies Act 2013 and its implications for social enterprises, as well as case studies of partnerships and investments in the social sector.

Raj Janagam, founder of UnLtd Hyderabad, talked about about India’s accelerating social entrepreneurship movement. He pointed out that the recent amendments to the Companies Act give a clearer roadmap and the push for social enterprises to work together with for-profit businesses. Andrew McAllister, in his speech, brought out the fact that forums such as these were where seeds of new ideas could be sown to create practical outcomes. He informed the attendees that UK was one of the pioneers in CSR, dating back to the 1840’s. It saw a resurgence in the 1990’s when charities, cooperatives, community enterprises and other forms of social businesses came together to create a business eco-system which drove social change. Today UK has 70,000 social ventures contributing, £18 billion to the economy while employing one million people.

The first panel titled ‘Social Enterprise: UK and India’ included Harvey Koh, Srini Nagarajan and Prema Gopalan as speakers and Pooja Warier, co-founder of UnLtd., as the moderator. Harvey Koh spoke about the way in which his company sought to create change. The idea was to take the skills and resources of private equity and use it to scale up non-profit organisations and social enterprises. In essence they funded organisations which were effectively countering important social issues, by investing medium term growth capital in them and supporting them in scaling up. Prema Gopalan emphasised the importance of creating job creators rather than helping job seekers. Long term partnerships and a shared vision are important to create an impact especially between two sectors, the business and social, which essentially speak two very different languages. What is required is not to create structures but to reduce the risks and fears involved in such partnerships. Srini Nagarajan spoke about the three streams of investment his organisation (CDC) promotes which includes, debt, direct investment in form of equity and fund of funds business. He added that CSR for a company must be linked to its core business for it to make an impact. The leadership of the team has to show that CSR is something whose value is shared, between the company and the entity being helped.

The second panel — ‘Corporate Social Responsibility- Looking Back, Looking Ahead’ — focussed on the Indian scenario with regards to CSR. Abhishek Humbad explained some of the legislative changes brought about by the new Companies Act highlighting that over 16,000 companies come under the new CSR regulations with Rs 22,000 crores to spend every year. He pointed out that while corporates have a large pool of capital, they are not knowledgeable about which problems could best be addressed. Other than the quantum of capital that the new law requires companies to invest, it also makes the board of the company liable for any CSR activity. Thus the responsibility has now shifted “from the back room to the board room”. The relationship between CSR and government activities has been a relatively less studied area. Professor Rajesh Chakrabarti then presented a case study on CSR prepared under the aegis of the BIPP that focussed on the challenges related to CSR in Raigarh district of Chhattisgarh. The protagonist of the story, Amit Kataria, District Magistrate, worked towards creating a dialogue with various stakeholders — the companies and the panchayati raj institutions — to begin co-ordinated exercises which allowed for more efficient spending on issues where the aligned policy helped create more impact. The unintended impact of this, however, was the way in which the government budgeted the CSR allocation in its overall budget blurring the lines between the willingness of the contribution by the corporate and those mandated by the government. 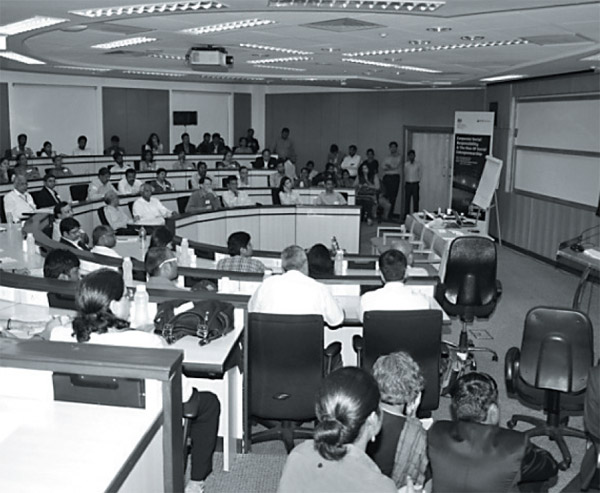 The workshop in progress

Jyotsna Beliappa spoke about going beyond CSR to focus on awareness of issues, understanding stakeholders and the impact one has on a community. She emphasized that the issue of difficulty in collaborating with corporates will last till companies realise what they want to focus on. Anu Gupta spoke about DFID’s interventions with companies in India. She explained that DFID invests in social enterprises related to clean water and sanitation solutions along with health care and microfinance, creating employment for the underprivileged.

Over 100 participants attended, with an equal representation from companies and social enterprises, to explore opportunities for knowledge sharing, networking and exploring future partnerships and collaborations. The workshop received an enthusiastic response from participants who engaged with the speakers through the question and answer sessions after each panel as well as during the networking high tea that followed the event.