In this article, Professor Radhika Lunawat analyses how disclosure and financial reporting can serve to repair reputations and rebuild investor confidence in the aftermath of the global economic recession. Economic institutions have an important role to play in facilitating the restoration of managerial reputations and trust, which are essential for economic development, she argues

Economic downturns bring in their wake a great deal of suffering and leave a trail of shaken confidence and broken trust in the economic system. The financial meltdown of 2007-09 is a case in point, and Sapienza and Zingales (2009) describe the concomitant loss of trust among economic agents as follows:

Without trust, cooperation breaks down, financing breaks down and investment stops. One can bomb a country back to the Stone Age, destroy much of its human capital, and eliminate its political institution. But, if trust persists, the country may be able to right itself in just a few years, as in Germany and Japan after World War II. Conversely, you can endow a country with all the greatest natural resources but if there is no trust, there is no progress.

As businesses launched what BusinessWeek referred to as the “Great Trust Offensive” to regain lost trust and reputation in a bid to win back consumer confidence, one question remained unanswered: are there forces in the economy that facilitate the natural rebuilding of trust and reputation? This article argues that disclosure is one such force that provides opportunities for building managerial reputation. We will examine these forces at a very basic level, that is, the level of economic transactions since a multiplicity of these transactions builds the momentum of economic activity, which then translates into economic development.

Trust is widely accepted as a necessary condition for virtually every economic transaction. We focus here on the transaction of exchange inherent in investment, because at the heart of a multitude of economic transactions of varying degrees of complexity is this simple exchange between two parties. One of the parties to the exchange has resources that he entrusts to the other party. The other party has the ability or the technology to multiply those resources. Implicit in this exchange is the risk borne by the first party that the second party may return nothing to him. Given the incompleteness of contracts, such risk brings the importance of trust into sharper relief. The nascence of enforcing institutions in emerging economies further underscores its importance. We will use the above basic framework of economic exchange to explore the role of disclosure and fi nancial reporting in improving trust, facilitating reputation building and stimulating investment.

Consider the following economic transaction (Scenario A below). 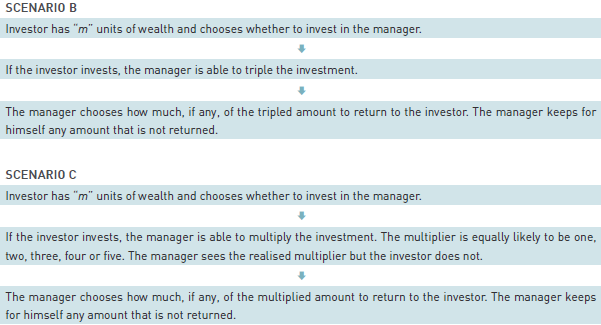 Since the investor does not see the realised value of the multiplier, the manager can hide behind the possibility of a low realisation. For example, suppose that the investor chooses to invest in period one. Suppose further that a multiplier of four is realised so that the manager receives “4m”. Let us say there is an evolved norm that a truthful manager returns half of what he receives. A truthful manager would, therefore, always return “2m”. However, a manager that acts in pure self-interest will return “m/2”, thereby implying to the investor that no multiplication occurred (or, equivalently, a multiplier of one occurred).

The downward revision of beliefs has a dampening effect on investment in the economy. Suppose the investor has an investment strategy whereby he invests only if he believes that there is at least a 70% chance that the manager is truthful. Now, in the second period, the investor believes that there is a less than 70% chance that the manager is truthful, hence, he will not invest. This issue can be resolved by introducing the possibility of financial reporting

The downward revision of beliefs has a dampening effect on investment in the economy. Suppose the investor has an investment strategy whereby he invests only if he believes that there is at least a 70% chance that the manager is truthful. Now, in the second period, the investor believes that there is a less than 70% chance that the manager is truthful, hence, he will not invest. This issue can be resolved by introducing the possibility of financial reporting (Lunawat 2013a). In this situation (Scenario D), financial reporting will take the form of the manager disclosing to the investor his private information about the realised value of the multiplier.

Now, the manager is unable to hide behind a possible low realisation of the multiplier. The manager, even though acting in his own self interest, is forced to a return fair dividend to the investor. Financial reporting, in this scenario, disciplines the actions of the self-interested manager. In the process, financial reporting facilitates a self-interested manager’s efforts at building a reputation for being trustworthy and also stimulates investment. However, there are constraints to how far financial reporting can go. 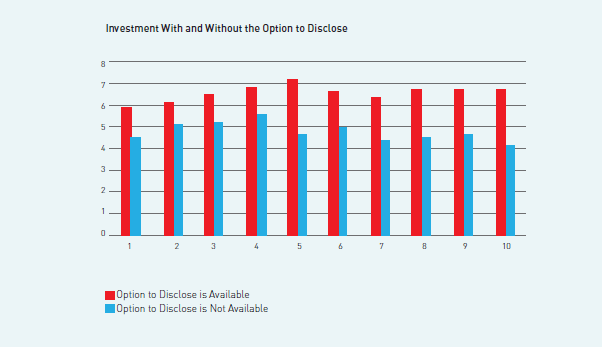 Overall, disclosure accomplishes an improvement in investment and this is corroborated by experimental data (Lunawat, 2013b). The following graph shows data from a laboratory experiment with human subjects (Lunawat et al., 2014). The subjects were mostly students and the experiment was run at a research centre in Montréal, Canada. Half of the subjects were assigned the role of an investor while the other half were assigned the role of a manager. The investors were endowed with 10 units of experimental currency units and chose how much, if any, to invest in the manager they were paired with. The managers made a return decision, as described earlier. In some sessions of the experiment, the managers had the option to truthfully disclose their private information to the investor, and in the other sessions, they did not have any such option. The average investment without the option to disclose is 4.77 experimental currency units, which jumps up to 6.53 experimental currency units once the option to disclose is introduced.

The above discussion has focussed on the relationship between trust, reputation and disclosure in economic exchange. Given the perniciousness and repeat occurrences of financial scandals, the innate role disclosure plays in building and repairing trust provides a window of opportunity for instituting and regaining investor confidence.

Lunawat, R. 2013 (b). An Experimental Investigation of Reputation Effects of Disclosure in an Investment/Trust Game.” Journal of Economic Behavior & Organization 94 (2013): 130-144.

Lunawat,R., G. Waymire, and B. Xin. 2014. A Glimpse Behind the Curtain That Conceals Self-Dealing. Working paper. 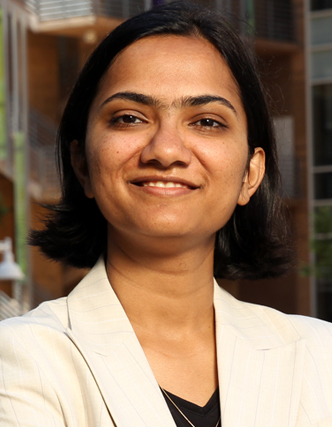 Radhika Lunawat is an Assistant Professor at The Paul Merage School of Business at the University of California, Irvine, California.