Professors Viral V Acharya and Raghuram G Rajan’s paper, “Sovereign debt, government myopia and the financial sector”  won the NSE best paper award presented during the Summer Research Conference 2012 organised by the Centre for Analytical Finance (CAF) at the ISB. In this article, Professor Acharya presents a summary of their award-winning paper.

Why do  governments   repay external sovereign borrowing?  Models  where countries ser vice  their external debt for fear of being excluded from capital markets for a sustained period seem ver y persuasive, yet are at odds with the fact that defaulters seem to be able to return to borrowing in international capital markets  after  a short while. With sovereign debt in industrial countries at extremely high levels, understanding  why sovereigns repay foreign creditors, and what their debt capacity might be, is an important concern for policy makers and investors around the world.

A   number of  recent papers offer a  persuasive explanation of why  rich industrialised countries ser vice their debt without being subject to  coordinated punishment.  As a countr y becomes more developed and moves to issuing debt in its own currency, more and more of the debt is held by domestic  financial institutions  or  is  critical to  facilitating domestic financial  transactions.   Default on  domestic bond holdings  now automatically  hurts domestic  activity by rendering  domestic  banks insolvent or reducing activity in financial markets (see Bolton and Jeanne, 2011 or Gennaioli, Martin and Rossi, 2011). If the government cannot default selectively  on  foreign holders of its debt, either because it does not know who owns what or cannot track sales by foreigners to domestics (see Guembel and Sussman, 2009 and Broner, Martin and Ventura,  2010 for rationales), then it has a strong  incentive  to avoid default  and make net debt repayments to all, including foreign holders of its debt.

What  is less clear is why an emerging market or a poor countr y that has a relatively underdeveloped financial sector, and hence little direct costs of default, would  be willing  to ser vice  its debt. Government short termism may explain this. We argue in Achar ya and Rajan (2011) that myopic governments seeking electoral popularity can nevertheless commit credibly to ser vice external debt. Short horizon governments do not care about a growing accumulation of debt that has to be ser viced – they can pass it on to the successor government  – but they do care about current  cash flows. So long as cash inflows from new borrowing exceed old debt ser vice, they are willing to continue ser vicing  the debt because it provides  net new resources.  Default would only shut off the money spigot for much of the duration of their remaining expected time in government.

Thus, we have  a  simple rationale for why  developing   countries may be able to borrow despite  the absence  of any  visible  mode of punishment  other than a temporar y suspension  of lending; lenders anticipate the developing countr y will become rich, will be subject then to higher domestic costs of defaulting and

Interestingly,  as the rate at which a government discounts the future falls (i.e., becomes less myopic), its willingness  to default  on legacy  debt increases. The long horizon government internalises the future cost of paying back  new borrowing,   as well as the distortions that stem from policies required to expand debt capacity. This makes borrowing less attractive, and since for a developing  countr y government   the ability to borrow more is the only reason to ser vice legacy debt, the long horizon government has more incentive to default (or less capacity  to borrow  in the first place). Similarly, developing countries  with more productive technology may also have lower debt capacity because the distortionar y taxation needed  to sustain access to debt markets will be more costly for such countries.

Because the costs of default are sizeable in our model only when the countr y becomes   rich, the nature of developing countr y defaults and rich countr y defaults are likely to be ver y different.  Developing  countries are more likely to default when revenue shortfalls or increases in expenditure lead to a buildup  of debt that can imply net debt outflows for some time. The reason for default is not that the countr y cannot  pay but that the time path of prospective payments does not make it worthwhile for the current government to maintain access to debt markets. For rich countries, however, the direct cost of default is substantial, and default looms only when the countr y simply does not have the political and economic  ability to raise the revenues needed to repay debt.

The ongoing sovereign crisis in Europe raises some fundamental issues that our model can speak to. For instance, our model explains why some governments keep current on their debt, even when most market participants  suggest that it would be better for them to default.  So long as the Euro area and multilateral institutions are willing to provide funding to tide the countr y over, myopic  governments  see no benefit in default, no matter how much debt accumulates. That does not mean, however, that ser vicing debt or taking actions that maintain or  expand long-term debt capacity are optimal.

For rich countries, the direct cost of default  is substantial, and default looms only when the countr y simply does not have the political and economic ability to raise the revenues needed to repay debt, as in the case of Greece. When rich countries are in danger of default,  outside agencies  that lend them more without helping these countries expand productivity and growth are only postponing the inevitable messy restructuring.  Rich countr y defaults  are more likely to be solvency defaults rather than liquidity defaults, and a simple rescheduling of debt without significant haircuts to face value is unlikely to help the countr y regain access to private markets.

Another interesting development in the ongoing sovereign debt crisis in Europe is the extreme degree of dependence of the health of a countr y’s banking sector on the health of the government,  and vice versa. Achar ya,   Drechsler and  Schnabl (2010) document that the 91 European banks stress-tested in 2010 held sovereign bonds on average up to a sixth of their risk-weighted  assets, and that within these sovereign bond holdings, there was a “home bias” in that banks held a substantial portion  in their own government bonds (see Figure 1; for information on EU countr y codes please see Figure 2). Indeed, the home bias in sovereign bond holdings was the highest for countries with the greatest risk of government debt default, suggesting they are positively correlated. Countries that are at greater risk of default also have banks whose portfolios  are stuffed with their own government debt.

One explanation  is that banks are buyers of last resort for their government’s debt, and this is why risky countries  that find no other takers, stuff their banks  with their paper. An alternative explanation (see Diamond and Rajan, 2011) is that banks have a natural  advantage in loading up on risks that will materialise when they themselves are likely to be in default.  However,  a  third, not mutually  exclusive, explanation  is ours − that countries  have to prove to new bondholders their enduring resolve to ser vice their foreign debt, and this is best done by making the costs of default on domestic debt prohibitively costly.

In this vein, consider  the recent proposal  of the Euro area think tank, Bruegel,  for Euro area sovereigns to issue two kinds of debt, one (blue bond) that is guaranteed by all Euro area countries  and will be held by domestic  banks, and another (red bond) that is the responsibility of the issuing countr y only and which  domestic  banks will be prohibited from

Countries that are at greater risk of default also have banks whose portfolios are stuffed with their own government debt.

holding. Our model points out that there is ver y little reason for a countr y to ser vice the red bonds. These will not be held by key domestic financial institutions, and therefore, will not cause many ripples if they are defaulted on. This will make  it hard for a countr y to  borrow sizeable amounts through red  bond issuances, which may indeed be the subtle intent of the proposal. 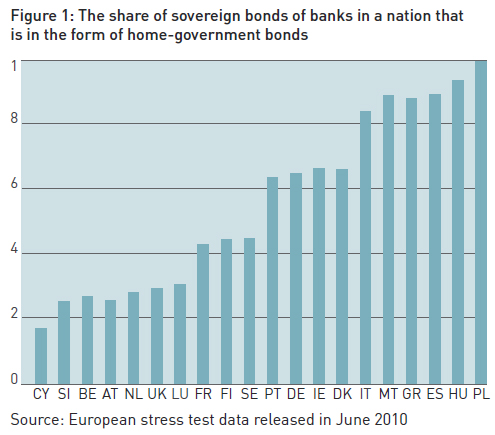 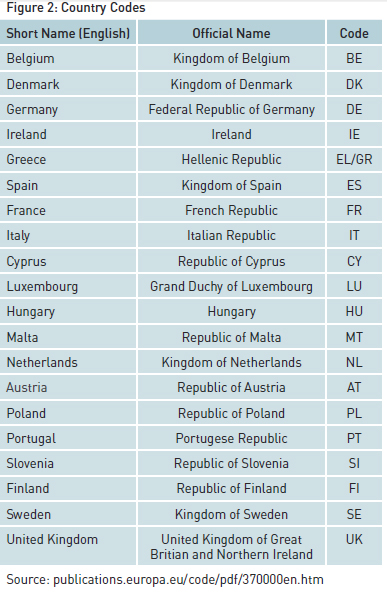 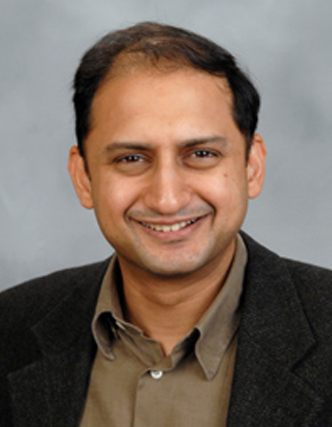