The newly developed Smart Cities Index provides a comprehensive framework for assessing the quality of city services for the 53 million plus cities in India across a variety of characteristics. Analysts at the Indian School of Business Punj Lloyd Institute of Infrastructure Management, Ashish Mohan and Tryambakesh Kumar Shukla, reveal the journey behind the development of the Index and highlight the glaring data gaps that hinder urban development in India.

Sustainable urban development in India needs a strategic path. The existing landscape provides a grim picture of urban development. For instance, the High Powered Expert Committee led by Isher Judge Ahluwalia in 2010 estimated that an investment of nearly ₹39 trillion would be needed for developing urban infrastructure to requisite benchmarks over 2012-2031. As per the McKinsey Global Report on India’s Urban Awakening, India’s existing urban population is slated to increase two-fold in the next three decades, thereby creating a mounting need to manage cities and to improve service levels of city infrastructure.

Realising the need, Government of India has sharpened its focus on urban development through the launch of various flagship programmes such as the Smart Cities Mission and Atal Mission for Rejuvenation and Urban Transformation. As the Smart Cities Mission and other urban development initiatives roll out, tracking their progress, assessing city performance in a comparative perspective and monitoring the level and usability of services in cities become absolutely essential. It was to address this gap that the Punj Lloyd Institute of Infrastructure Management at the Indian School of Business developed the Smart Cities Index.

The Smart Cities Index study provided a framework that ranks cities based on an assessment of the level of services. The Smart Cities Index measured the quality of services of 53 cities with a population of more than one million, across 58 indicators for six different characteristics. The 58 indicators represented 34 factors that were then combined to form six urban characteristics: Living, Economy, People, Governance, Mobility and Environment. These indicators were developed after series of consultations with government organizations, academic institutions and think-tank initiatives.

As the Smart Cities Mission and other urban development initiatives roll out, tracking their progress, assessing city performance in a comparative perspective, and monitoring the level and usability of services in cities become absolutely essential.

The characteristics measured by the Smart Cities Index are as follows:

Figure 1 explains how these characteristics map on to the factors. 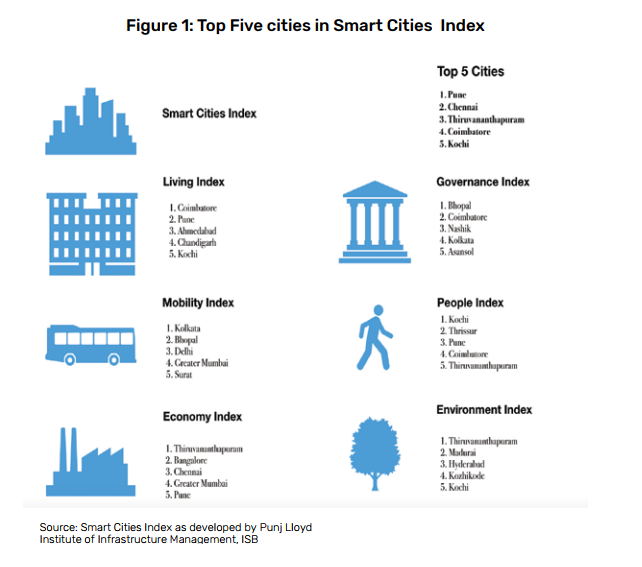 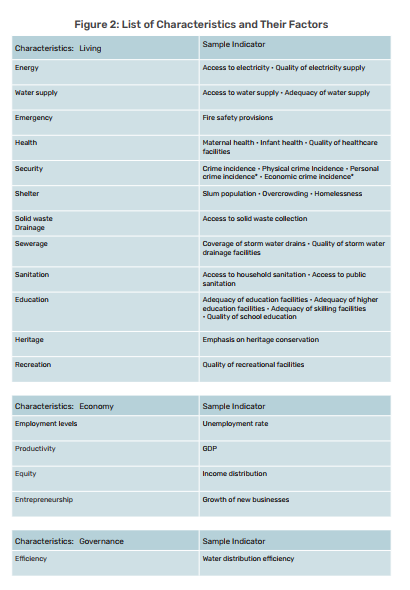 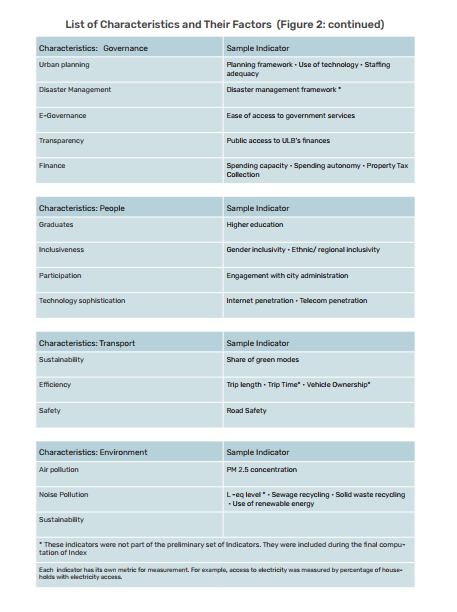 South Indian cities fared much better than their north Indian counterparts. Interestingly, not one of the million-population cities from the states of Uttar Pradesh, Bihar and Orissa matched the median score of either the overall Smart Cities Index ranking or the six characteristics rankings.

The Smart Cities Index analysis highlights the performance of Indian cities as of the year 2015-16. Pune tops the overall city ranking, followed by Chennai, Thiruvananthapuram, Coimbatore and Kochi.

South Indian cities fared much better than their North Indian counterparts. In all of the characteristics, South Indian cities outperformed North Indian cities with the exception of Delhi, Kolkata, Chandigarh and Bhopal. Interestingly, not one of the million-population cities from the states of Uttar Pradesh, Bihar and Orissa matched the median score of either the overall Smart Cities Index ranking or the six characteristics rankings. Even cities such as Lucknow, Allahabad, Patna and Jamshedpur ranked in the bottom 20 of the Index, thus stressing the need for a more strategic approach towards urban development in North India.

None of the cities had readily available data for all the 58 indicators. With the exception of few cities such as Bhopal and Mumbai, the majority had at least two to three indicators missing for a given factor. Most of the cities had numbers missing on factors such as Efficiency, Urban Planning, Disaster Management and Finance, especially on the broader Governance characteristics. One of the indicators, the Disaster Management framework, could not even be included in the ranking methodology, as more than 40 cities lacked this information. This indicator was intended to shed critical light on cities’ preparedness for disasters and their level of resilience in the event of natural or man-made disasters. 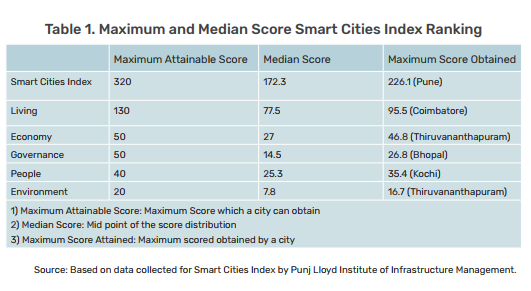 More surprisingly, cities also lacked data on such administrative variables such as staffing adequacy calculated on the basis of the number of certified town planners in Urban Local Bodies (ULBs) per one lakh population, or on public access to the ULB´s finances, a binary variable captured by the existence of an audited balance sheet of the ULB in the public domain.

Cities also lacked data on such administrative variables such as staffing adequacy, calculated on the basis of the number of certified town planners in Urban Local Bodies (ULBs) per one lakh population, or on public access to the ULB´s finances.

Delhi, the National Capital, lacked data for four indicators in Governance. These included the Number of Certified Town Planners working in the ULB, Capital Expenditure of ULB per lakh population, Percentage of revenue of ULB to state total revenue and percentage of non-revenue water. Similarly, in Living, data for three indicators were missing – Percentage of Population with Potable Water Supply, Percentage of Road Network with Covered Storm Water Drains and Percentage of Incidences of Road Flooding in a year. The nonavailability of this data caused Delhi to rank 16th on the Index. Similarly, other Tier – I cities likes Chennai, Kolkata, Hyderabad, Bangalore and Greater Mumbai also lacked data for at least one indicator.

One possible reason for the better performance of some Tier-II cities, such as Thiruvananthapuram, Coimbatore, Kochi and Chandigarh, relative to Tier-I cities could be the availability of more data points for these Tier-II cities. For example, Thiruvananthapuram only lacked data for three indicators in Governance and two indicators in Living. However, since the study has used the percentile ranking methodology across the indicators, missing data points could not have significantly influenced the skewness of the ranking.

One possible reason for non-availability of data could also stem from ULBs not collecting this information, or not putting such data in the public domain. Although Right to Information (RTI) applications were filed during the data collection phase of the Index, the ULBs were unable to furnish the required information.

However, it is evident that in each of the characteristics, there is tremendous scope for improvement even for the top-ranked cities as Table 1 shows. In the overall ranking, with a total obtainable score of 320, top-ranked Pune just managed to obtain 226.1. Pune was not even in the top five cities in Governance, Mobility and Environment indices. On Mobility, the city was not even in top 10; it ranked 12. The city scored very high in providing the majority of basic services like water supply, sewage, and sanitation. It scored very high on Economy, but it has areas for concerns as well. The city has a mediocre personal crime per incidence score. With 0.06 certified town planners working in the ULB per one lakh population, Pune scores very low on the number of certified town planners. If this is the case of the top-ranked city in India, conditions elsewhere can be expected to be much worse.

The Importance of Indexing

A study of this nature is crucial to understanding the relative position of cities in the Indian context. In his address at the Smart Cities Index launch event, Mr Amitabh Kant, Chief Executive Officer, NITI Aayog summed up the need for capturing a change in the state of civic services offered by Indian cities:

The Smart Cities Index stands alone in terms of its comprehensive framework. More such indices are needed to create healthy competition among the cities and to monitor city progress over time. The Government of India has recently taken the initiative of developing an index for measuring the quality of life in cities. But in order for more of these indices to be available to Indian cities to monitor and cross-check their performance, a more conscious effort is needed by local governments to create performance metrics for cities and collect data on them on a regular basis.

More details about the Smart Cities Index can be accessed on the website of the Shakti Foundation and the Punj Lloyd Institute of Infrastructure Management at the Indian School of Business: 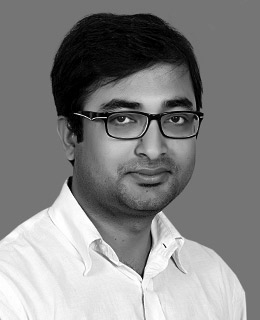 Ashish Mohan is an Analyst with Punj Lloyd Institute of Infrastructure Management at ISB. He was the lead researcher for the Smart Cities Index. 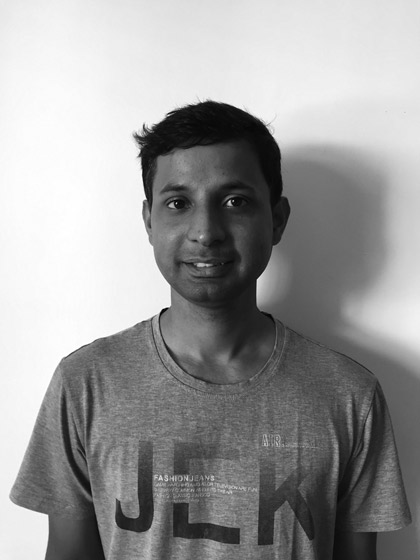 Tryambakesh Kumar Shukla was a Teaching Assistant and Analyst with Punj Lloyd Institute of Infrastructure Management at ISB. He is now with World Vision International.