Making a Difference with Social Business

Nobel Laureate Muhammad Yunus, noted economist and founder of the Grameen Bank, an institution providing microcredit to the poor in Bangladesh, hosted a live Webcast on the occasion of Social Business Day.  This article presents an overview of the event that was attended by over 100,000 students from countries including India and Bangladesh.

Social Businesses can help bring about financial inclusion. In his talk, Muhammad Yunus spoke about the the importance of social businesses in poverty alleviation. Criticising the money-making tendency of businesses, Yunus stressed the need for social businesses to focus on overcoming a problem while recovering the costs. He urged the students to think beyond profits. “Two thirds of the people are isolated from the banking system,” he said. Banks typically do not give loans to the poor, which prevents majority of the population from accessing credit facilities. Thus, social businesses help in including the poor in the growth cycle. He exhorted the youth to tackle the country’s myriad problems such as health, environment, unemployment, housing and job creation, instead of focusing on return on investments alone.

Elaborating on the history of his brainchild, Yunus recollected for the young audience how Grameen Bank was founded with the central idea of lending money to the poor and not to the privileged. It had taken form in Jobra, Bangladesh and now has become a success story in the Microfinance industry. Creativity is a crucial element of social businesses. Yunus elaborated on Grameen Danone Foods Ltd., an example of a creative initiative, in which yoghurt, enriched with all essential nutrients, is sold at a low cost to children in Bangladesh. Research indicates that continuous intake of this yoghurt for eight months transforms a malnourished child into a healthier child. Espousing the social business cause, Yunus urged students to make a difference in the world, however small, before opening the session for questions.

At the time of sanction, microfinance loans do not usually require collateral. Is there a possibility of switching to a collateral system?
Microcredit is well-defined. Collateral builds a wall. The concept of microfinance relies on one factor, which is trust. It is a social business and not a profit-centered business. The impact created is important. Microcredit is aimed at people who usually have no assets. Also, collateral comes at a cost to the lender as well – records need to be maintained, documentation expenses, lawyer expenses in case of litigations, etc. Trust is the single differentiating factor and much cheaper than collateral.

Banks typically do not give loans to the poor, which prevents majority of the population from accessing credit facilities.

Which social businesses should India start and why?
India is a big country. Each individual, city, state has its own priority. It is for you to decide the best option. Poverty, irrigation and electricity-related issues need to be addressed. Pick up a problem that if solved, would help a large segment of the population. In addition, try solving something for which plans can be easily implementable. Once you start a social business, focus your energies on it for desirable results.

Would it be better if social businesses are centralised in nature?
It is an individual decision. Discussing with like-minded friends can aid the cause. Participation is of utmost importance. As the idea begins to take shape, you can expect more people to join. Once a critical size is achieved, then the corporate sector can be approached for financial help. They would be ready to help if they find the idea implementable. However, all this would depend on the person who initiates. It would be better to retain some control as it is a learning phase.

What is the role of a student in spreading awareness?
The best option is to use social networking. Use social media with the technology currently in use and spread awareness. Find like-minded people on Facebook, Twitter and discuss your ideas with them. Once you get feedback, implement those ideas that you feel will help society. In addition, these days, a lot of universities have social clubs. They can contact Grameen Creative Labs for any further assistance.

How has Grameen Bank ensured a low default rate?
For 35 years now, the default rate has been very low. It is basically because the relationship with the borrower is based on trust. Loans are usually given to groups of five members and they are mostly women. In case they find it tough to repay, then loans are rolled over after discussions with bank officials. The system is flexible and hence the default rate is quite low. 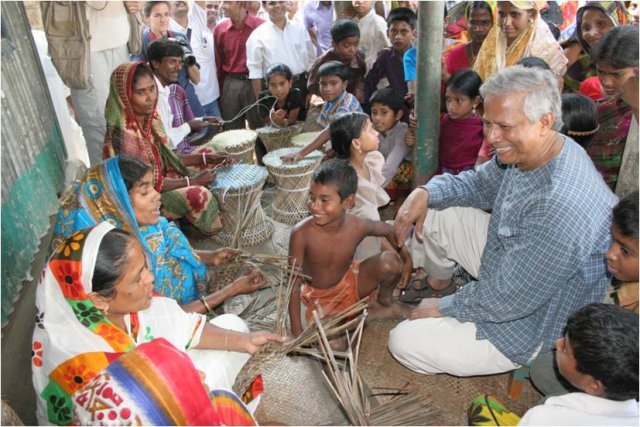 Microfinance has proliferated on a large scale in India and we have seen few issues in Andhra Pradesh and Karnataka. What do you think the issues are?
The incidents have been unfortunate and one of the reasons is overcrowding of microfinance institutions. They have been very aggressive in giving loans to fight for market share. Another aspect that led to this problem was “overspeed,” that refers to the speed of sanctioning loans. The regulatory framework was also never established. Politicians used it for publicity. Now with some intervention by the government, interest rates have cooled down a bit. However, the regulator has to step in and fix a set of rules for the issue to be sorted completely.

Pick up a problem that if solved, would help a large segment of the population. In addition, try solving something for which plans can be easily implementable.

What were the problems you faced when you started?
The biggest problem was that there were no prior models against which we could check our progress. This was both an advantage and a disadvantage. We learnt a lot by experimentation. Another issue was that the word “bank” was not heard by a vast majorityof people in Bangladesh. It had to be explained in Bangla and people had to be taken in confidence. There were also political issues with a few politicians objecting to our idea. Despite all these hurdles we successfully implemented our ideas with a vision to eradicate poverty and empower the poor.

Hemchandra Kurra, PGP Class of 2012, compiled this report for ISBInsight. 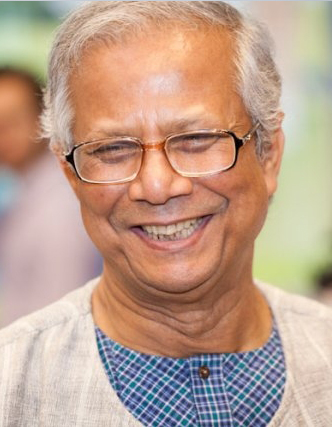 Chairman of Yunus Centre; Social entrepreneur; Nobel Peace Prize laureate for founding the Grameen Bank and pioneering the concepts of microcredit and microfinance.