This research article looks at the impact of incentives, personality types and gender on sharing intellectual wealth.

In an increasingly complex and unpredictable world, the development, exploitation and management of knowledge are the keys to building a competitive advantage for modern organisations. Most organisations have formal knowledge management initiatives that consists of information systems designed to hold and distribute codified knowledge. While managing knowledge is ostensibly critical to professional firms, it is implicitly believed that employees will share knowledge if they are provided with adequate infrastructure and incentives (Zack 1999, O’Leary 2002). This research is an attempt to investigate the impact of different personality types, various incentives and the role of gender on ‘knowledge hoarding’. Knowledge acquired during the course of one’s job belongs to the organisation rather than the individual. However, some individuals perceive this as their personal intellectual property and hence do not share it with others in the organisation. This phenomenon of not sharing information is defined as “Knowledge Hoarding”.

Research Methodology
A sample of 207 Indian corporate employees with an average experience of five years participated in this survey. Respondents from a range of industries (spread indicated below) were invited to participate in the study. They were chosen randomly and cut across industries as illustrated.

Each participant responded to a set of two written scenarios depending on the particular experimental condition to which they had been assigned. These scenarios described opportunities to share acquired knowledge with other co-workers that would enhance employee effectiveness and productivity. Responses were aggregated across the scenarios after removing inconsistencies and formed the input for further regression analysis. We evaluated two types of personalities – Self Monitoring people and Empathetic people.

Self-monitoring theory is a contribution to the psychology of personality, proposed by Mark Snyder in 1974. The theory refers to the process through which people regulate their own behaviour in order to “look good”, so that they will be perceived by others in a favourable manner. 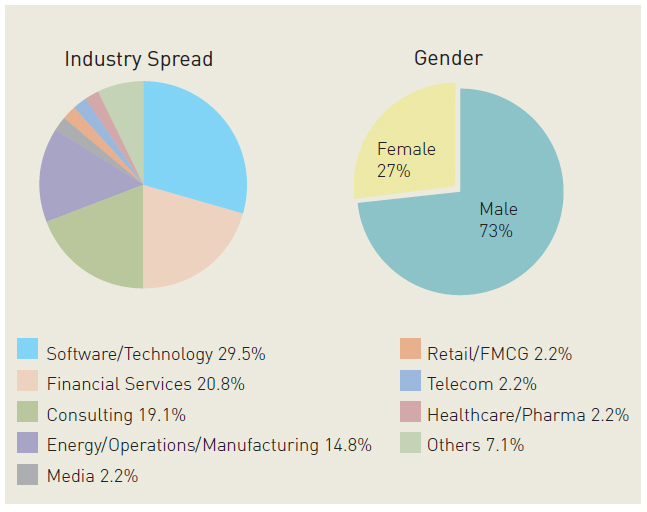 Empathy, which literally translates as in feeling, is the capability to share another being’s emotions and feelings.

Self-monitoring and empathetic personality types were measured using a modified version of the scale developed by Lennox and Wolfe (1984) .

Research Findings and Implications
Based on the survey responses and subsequent focus group discussions with the respondents, we realised that the willingness to share knowledge is indeed a big predicament for the organisations. Firms which rely on employees sharing proprietary information have to rethink the design of their knowledge management incentives systems. The findings are summarised below:

Employees do not share knowledge either intentionally or unintentionally. For the purposes of this study, we have limited the research to intentional knowledge retention in corporate organisations.

This study has shown that organisations may be mistaken in believing that employees will share information if knowledge management systems are made available. Our research has highlighted the importance of understanding the motivations for knowledge sharing amongst employees. Managers need to understand the interaction between different drivers such as personality, gender, and incentives, amongst other things, to foster a strong culture of knowledge sharing in an organisation. Our study further suggests that organisations need not resort to costly monetary or recognition-based incentives for sharing to encourage free flow of knowledge. This research is a continuation of ongoing studies on designing effective knowledge management systems. It may be read in conjunction with other studies done in the past, especially in the Indian context, for a more holistic outlook.

The research can be extended further by looking at the impact of other factors such as the nature of the organisation, employee’s association with teams and organisations, family background, religious beliefs etc, on sharing of intellectual wealth in an organisation.

The authors wish to thank Dishan Kamdar, Associate Professor of Organisational Behaviour and Associate Dean, Academic Programmes at the Indian School of Business (ISB) for his guidance and mentorship

Student of the ISB, Class of 2010. Prior to joining the ISB, he was working with a Fortune 500 oil and gas consulting firm.

Student of the ISB, Class of 2010. Prior to joining the ISB, she was working as a consultant with a leading consulting firm.

An alumnus of the ISB, Class of 2009. He is currently working as a management consultant with a leading consulting firm.