A K Shiva Kumar
in Past Issues, Apr-Jun 2012, Cover Story

Noted economist A K Shiva Kumar presents his case for Universal Health Care as a means of addressing health inequities in India and improving citizens’ access to quality health care.

India fares poorly on most health indicators compared to countries even within South Asia. For instance, the life expectancy at birth is lower in India than in Bangladesh and Nepal. This is despite the fact that the per capita income and growth rates over the past two decades have remained significantly higher in India than in the two countries. Similarly, levels of child under-nutrition in India (measured by the proportion of children under five who are underweight) are among the highest in the world. A closer examination of health indicators further reveals enormous inequalities within India – across states, between rural and urban areas and among different communities, with Scheduled Castes, Scheduled Tribes and Muslims faring worse than the rest of the population.

Many of the well-known gaps in India’s health care delivery system – persistent health inequities, inadequate availability, poor reach, unequal access, poor quality and the high cost of health-care services – can be traced to deficiencies in the patterns of health financing. Three features are striking.

Second, few Indians enjoy financial protection against medical expenditures. India’s medical insurance sector remains small and fragmented and benefits accrue only to a privileged few. For example, both the Central Government Health Scheme (CGHS) and the Employees’ State Insurance Scheme (ESIS) offer benefits to only a select group of employees. The Rashtriya Swasthya Bima Yojana (RSBY) extends financial protection to below poverty line (BPL) families and covers only tertiary care up to a limit of R 30,000 for a family of five. The majority of unorganised sector workers (close to 93% of India’s workforce) has no financial protection against ill-health and medical expenses. Without financial protection, many families become severely impoverished, ailments remain untreated and hospitalisation costs are typically financed by loans and the sale of assets.

Third, Indians largely get very low value for money from both private and public providers. A few top-end hospitals in the public sector do offer excellent allopathic care but these are mostly overcrowded, inefficiently managed and accessible to those with political and bureaucratic influence. Many of the health subcentres, primary health care centres and community hospitals suffer from inadequate facilities, insufficient staffing, high corruption, low accountability and poor governance. The extremely heterogeneous private sector also does not assure value for money. India has superb private hospitals that offer world-class services to foreign clients and high-income Indians at internationally “reasonable” prices. At the same time, there are also millions of private “quacks” who offer medical care without having any medical qualifications or training. In between these two extremes are a large number of clinics and low-cost hospitals accessible to those who can afford to pay for their services. Given the virtual absence of effective regulation, it is very difficult for an individual to be assured of quality services. Also, many private sector providers are notorious for prescribing unnecessary tests and procedures, taking kickbacks for referrals and for irrational prescription of drugs.

Dependable private sector providers offering quality services are virtually nonexistent in most rural areas. In many rural areas and several urban settings, the public sector is the only source of any credible medical care. This is to be expected given the extremely high levels of rural poverty and the limited ability of the poor to pay for health care.
The Case for Universal Health Coverage (UHC)

Dependable private sector providers offering quality services are virtually nonexistent in most rural areas. In many rural areas and several urban settings, the public sector is the only source of any credible medical care.

The High Level Expert Group (HLEG) on Universal Health Coverage (UHC) established by the Planning Commission envisages that every Indian citizen (not just the poor) shall be entitled to a national health package of essential primary, secondary and tertiary care, both in-patient and out-patient, that is cashless at the point of service delivery. Health and medical services shall be provided by a strengthened public sector complemented by private providers who will be “contracted in” to fill gaps in public provision wherever necessary. Such contracted-in private providers will have to deliver cashless services and would be compensated based on a pre-determined cost per package of health services rather than a “fee for service” for each visit or procedure. The private sector should act as an extension of the public sector where needed and will not compete for the same set of services for the same people.

How do we move towards UHC? The first priority should be to greatly strengthen the delivery of primary health care in the public sector by ensuring improved and adequate facilities, appropriate staffing and effective outreach and access to high quality care. The second priority should be to greatly enhance the size and quality of the health workforce by allocating sufficient resources to the production and hiring of community health workers, mid-level health workers and doctors for sub-centres and general and specialist nurses as well as non-specialist doctors for primary health care centres. As a third priority, essential medicines and diagnostics should be provided free of cost at all public facilities. In addition, the State should cover patient transport services and focus on difficult-to-reach areas and vulnerable population groups. The fourth priority should be to establish effective regulatory systems – from hospital accreditation to health professional education and from drug licensing to mandatory adoption of standard management guidelines – for the diagnosis and treatment of different disease conditions at each level of health care. The fifth priority should be to establish a national interoperable Health Information Network to improve governance, accountability, portability, storage of health records and management. Lastly, larger investments should be made in health promoting programmes in other related sectors such as water, sanitation, nutrition, environment, urban design and livelihood generation.

How should financial resources be mobilised and where should they be spent? UHC will have to be primarily funded by taxes. Contributory options are unlikely to succeed given that a large segment of the workforce is in the unorganised sector and vast numbers are below or near the poverty line. Second, services should be provided cashless at the point of delivery and all user fees should be abolished. Evidence from across the world has firmly established that user fees, by and large, tend to be inefficient, inadequate and iniquitous. Third, it is important to ring-fence a significant proportion of public spending to cover the provision of primary health care. The HLEG has suggested earmarking 70% for the purpose, though the proportion may vary from state to state depending upon the health care needs of the people. Fourth, conventional health insurance schemes should be done away with. There is overwhelming evidence to suggest that quite apart from the problems of malpractice, such schemes divert large sums for tertiary care, do not incentivise preventive and promotive care and do little to help with cost containment. Finally, new and flexible mechanisms of transferring financial resources from the centre to state governments must be introduced such that better performance and health outcomes are rewarded.

There is a growing consensus that India needs to urgently invest in advancing the health of its population. This is critical for assuring the constitutional right of citizens to health, enhancing productivity and promoting equity. The government of India has committed itself to increasing public spending on health to between 2 and 2.5% of GDP by the end of the 12th Five Year Plan. This is a welcome move as it will greatly reduce the burden of private out-of-pocket expenses and bring enormous relief to the public, especially to poor and middle income families. India has a long way to go in terms of improving the health status of its citizens. But every long journey must begin with a small step in the right direction – in this case by embracing the the vision of universal health coverage. 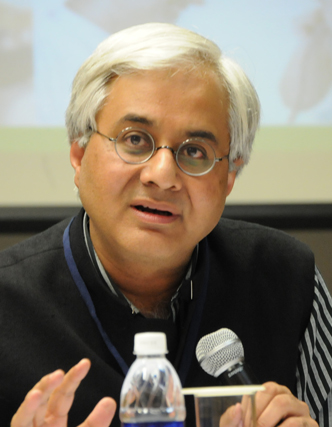 A. K. Shiva Kumar is a development economist and professor. He currently serves as the Director of the International Centre for Human Development (IC4HD), New Delhi. The IC4HD is a constituent of the United Nations and with support from the Ministry of Human Resource Development, India.