Debunking the Growing Myth of a China Inc.

In his short book “Is China Buying the World?”, Peter Nolan makes an analysis of the current view that global media has of representing China as a rising global power who is ‘buying the world’. A leading commentator on Chinese business and economics, Nolan examines the rise of China as a global power buoyed by the economic reforms initiated in 1978. Against the backdrop of the emergent Communist state, this rapid economic growth has puzzled most mainstream observers; especially the singular process by which the Communist-led state has integrated itself with the global market economy. 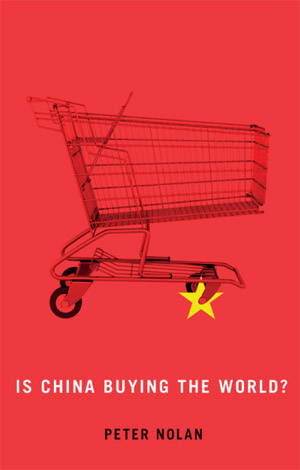 China is now the world’s second largest economy with a share of 14.9 percent of the global GDP in 2013. It also holds the largest national foreign reserves in the world. With the growing number of acquisitions made by State owned enterprises especially in the oil and minerals sectors, there is a rising element of fear underlying international media’s perception of China. Nolan suggests that the global media controlled by giant corporations is responsible for playing upon this perceived threat and that the media should take a more balanced view to promote constructive international relations between the West and China. He then proceeds to demonstrate how the phrase ‘buying the world’ is much more complicated than portrayed. In four brief chapters Nolan attempts to describe the changing nature of Chinese engagement with the global capitalist economy and the challenges it faces.

Nolan frames the main argument to his thesis through the dichotomy of “us vs. them”. By “us” he refers to the cluster of large global firms in key industries ranging from beverages to aircraft manufacturers with their headquarters in developed economies. Over the last three decades, increased globalisation and centralisation of capital, as well as the wide adoption of policies in line with the Washington Consensus, has led to increased consolidation and concentration among these industries. With most developed countries facing economic stagnation, these large firms began to look elsewhere, especially China and other emerging economies, to expand. A case in point is that of General Motors which has more revenue in China than in North America. As a result of increasing revenues, employment and procurement of resources from outside their home country, these large corporations are further weakening ties with their home countries.

Additionally, the consolidation among industries has also led to a concomitant consolidation of their supply chains. Various component suppliers have been forced to integrate their operations with the large firms at the top, which Nolan calls ‘systems integrator firms’. In the process of integrating with these systems integrator firms, the various suppliers’ firms have also been subject to increased control over their business operations. Such consolidation presents major challenges for new firms looking at entering and succeeding in these industries. The systems integrator firms including the likes of General Motors, Boeing and Coca Cola produce the final product and boast of the most distinguishable brands and best investments in technology and innovation. However, since these firms have extensive presence and investments across the developed and developing nations, Nolan points out that if the high-income economies fall into recession, the rest of the world would follow.

‘Them’ refers to the set of large corporations which the Chinese hope will eventually compete globally and challenge the current market leaders. These include firms like China Mobile in the telecommunications sector, Shanghai Auto in the automobiles sector and Industrial and Commercial Bank of China and Bank of China in the banking and financial services sector. Nolan states that as a result of continued ownership of these firms by the State, international firms were prevented from expanding through the mergers and acquisition route in China.

Despite China’s rapid economic expansion, however, Nolan writes “[that] there is still a wide development gap between China and the high-income countries” (p 66). A majority of Chinese firms while serving the domestic market face challenges in expanding overseas. Since China lacks key natural resources including oil and minerals, its imports from resource rich countries in Africa and South America have rapidly expanded. The export of Chinese goods and services to these countries has also significantly increased, but are considerably lower than Chinese exports to other developed economies such as the US, Japan and Europe. Nolan cites convincing statistical sources to support this argument.

Using data collected from the annual World Investment Report brought out by the United Nations Conference on Trade and Development, Nolan shows how the media distorts reports of growing foreign acquisitions by State owned enterprises from China. In comparing the net flow of foreign direct investment (FDI) into and out of China, Nolan points out that the inward-bound investments from developing countries including the US and European countries are substantially larger than the outward-bound investments from China.

In the concluding chapter, Nolan examines the two key industries of banking and commercial aircraft. Nolan indicates that Chinese firms do not have the same reach and influence as the systems integrator firms that are headquartered in developed countries. Apart from being heavily dependent on high income countries for technical know-how, Chinese firms also face obstacles to overseas expansion in the form of political and ideological resistance from Western governments, most notably seen in the failed “attempt by Chinalco to acquire a substantial minority stake in Rio Tinto” (p 109). Further, firms from the developing countries including China are unable to participate in global technological progress. This is starkly brought out by the fact that more than three-fifths of the world’s total investments in research and development can be accounted for by one hundred large corporations, all from developed countries.

In dissecting the hyperbole surrounding China’s ‘economic domination’, Nolan’s short and definitive answer to the global media conglomerates is an emphatic ‘no’! While large corporations from high income countries are deeply embedded within the Chinese economy, firms from China as well as other developing economies still face tremendous disparity of business power.

IS CHINA BUYING THE WORLD?