In the past decade there has been a dramatic growth in internationalisation of ﬁrms from India. Yet, there has been no systematic effort to rank Indian companies based on their degree of internationalisation. For the ﬁrst time, a systematic ranking is being attempted in India using a globally accepted, multi-dimensional measure of internationalisation, the Transnationality Index (TNI). The Indian School of Business, (ISB) and Brazil-based business school, Fundação Dom Cabral (FDC), recently released the results of their joint survey on the Ranking of Indian Transnational Companies. Professor Raveendra Chittoor and Arun Patro, a former research associate at the ISB, present highlights of the survey.

Transnational Companies (TNCs) account for over a quarter of the world’s GDP. Since the turn of the century, there has been a dramatic rise in multinationals from emerging economies such as India, Brazil and China, and this has caught the attention of many management scholars and practitioners.

Despite the remarkable rise of TNCs from India over the last decade, no systematic attempt has yet been made to rank Indian TNCs using globally accepted measures such as the Transnationality Index (TNI). The TNI based ranking would enable a proper comparison of Indian TNCs with each other as well as with other global players. The Transnationality Index combines three measures (Percentage of International Assets to Total Assets, Percentage of International Revenues to Total Revenues and Percentage of Overseas Employees to Total Employees) to determine the overall degree of internationalisation of companies. The multi-dimensionality of the index accounts for the variation in the three indicators across industries.

In India, it is not possible to calculate the Transnationality Index and rank companies using TNI based on secondar y data alone, as some of the measures are not publicly disclosed by ﬁrms. For example, the number of international employees or foreign assets cannot be obtained from public sources for all ﬁrms. Thus, our study incorporates a mix of primary and secondary research to arrive at the rankings.

Of the top 100 ﬁrms ranked by their consolidated international assets collected from secondary data, the top 50 companies were asked to respond to a questionnaire with information on their international activities. As this was the ﬁrst time such a survey was being conducted, the scope of the questionnaire was restricted to the three measures required to calculate the TNI index. The internationalisation measures were collected for the three ﬁnancial years 2008-09, 2009-10 and 2010-11. The data collected through primary research was validated again using available secondary data and a composite TNI ranking was created.

The top ﬁve companies listed in the tables below have a TNI greater than 50%, which is comparable to transnational corporations from the developed countries. A large number of companies in the TNI rankings have followed the strategy of inorganic growth through aggressive overseas acquisitions. These include Tata Global Beverages, Tata Steel, Hindalco, Suzlon, Dr. Reddy’s Labs, Bharti Airtel and Subex, among others. 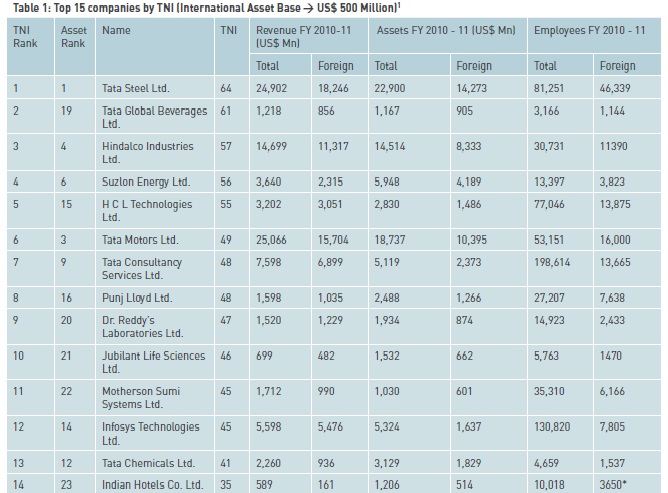 More than half of the top 15 TNCs are afﬁliated to business groups, a phenomenon unique to emerging economies, with companies from the Tata group dominating the list. A key driver behind the Tata group companies dominating this list could be its Chairman, Ratan Tata’s vision of globalisation. Suzlon Energy and Bharti Airtel are among the youngest companies in the list and have internationalised rapidly.

Globalisation by India Inc: Recent Trends India was ranked 21st in the world based on outward FDI in 2010. However, the global economic crisis slowed down the rapid internationalisation of Indian companies between 2008 and 2010. The crisis had its strongest effect in the ﬁnancial year3 2009-10, reducing OFDI by 26% as compared to 2008-09. While the total foreign revenues for the Top 50 companies remained unaffected in 2009-10, international assets decreased by 4% and the number of foreign employees by 2% as compared to 2008-09. 2010-2011 saw a sharp rebound, as foreign assets of the Top 50 companies grew by 29%, international employees by 15% and revenues by 25%. While Indian companies seem to have resumed internationalisation this year, it remains to be seen how Indian ﬁrms plan their international expansion under uncertain economic conditions.

More than half of the top 15 TNCs are afﬁliated to business groups, a phenomenon unique to emerging economies, with companies from the Tata group dominating the list.

Overseas investments over the last few years are ﬂowing not only into developing economies, but into developed countries as well. For expansion into developed countries, most Indian companies seem to prefer the M&A route. Companies afﬁliated to Business Groups – primarily Tata, Aditya Birla, Reliance, Mahindra and Mahindra and Godrej – account for more than 60% of overseas acquisitions by value. Among other private players, Bharti Airtel and Suzlon Energy deser ve special mention. Oil & Natural Gas Corporation which operates outside India through its overseas investment arm, ONGC Videsh, is the primar y public sector company among the major Indian transnationals.

As the foremost research driven business school in India, the ISB is keen to continue and enhance this effort to rank Indian TNCs using systematic and rigorous methods. Future reports will also include insights on the key drivers of globalisation, geographic spread of transnational companies, proﬁtability analysis across geographies, modes of entr y, and so on. The ISB is collaborating with FDC, which has been leading a similar effort in Brazil over the last few years, to compare and contrast transnational companies from India and Brazil. Partnerships are being forged with schools in Russia and China as well. With transnational companies from Brazil, Russia, India and China (BRIC) set to dominate the global economy in the future, this report on BRIC TNCs will truly be a unique and valuable source of insights for management practitioners and scholars alike.

1Wipro Limited, a large transnational IT services company, participated in the survey but was not able to provide a clear demarcation of assets in India and overseas, and thus does not ﬁgure in the rankings. We expect Wipro to be ranked at around the

1. 4th position on the list, using industry sources to approximately calculate its TNI.

2. Financial year ends in December and not March. 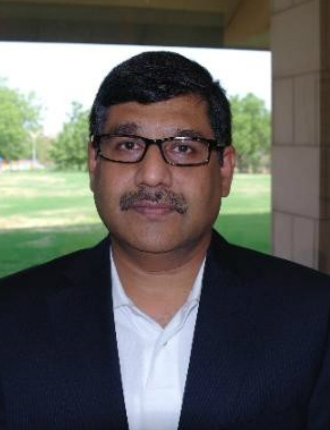