What impact does cultural orientation have on consumers’ attitudes to managerial practices in different parts of the world and how can this knowledge benefit organisations? Professors Tonya Boone and Rishtee Kumar Batra share insights from their research on Indian and American consumers’ perceptions about sustainability.

Management   research  has focussed  a great deal on understanding how cultural difference influences employees’ and consumers’ interactions with productive  organisations. In particular,  the need to understand  the  cultural  distances between Eastern and Western nations is becoming increasingly important   because of the tremendous economic growth taking place in India and China. Many of the prevalent managerial practices were developed in the West, yet at the same time,  new practices are emerging from  Eastern countries. Our research  suggests that managers should consider the cultural context when transferring  practices or knowledge from  one place to another.

Our most  recent research examines how consumers from India and the United  States differ  in their perceptions of sustainability1. Sustainability  has emerged as a significant managerial issue, as companies worldwide  implement  sustainability strategies. How consumers  think  about sustainability  has implications for a myriad   of organisational  processes, including strategy formulation and deployment, product design and supply chain management. Our work suggests that individual  perspectives on  sustainability are rooted in cultural  orientation.  Consequently, sustainability takes on different  meanings and subtleties in different contexts. This  poses a challenge to managers  as they seek to implement or transfer knowledge gained in one context to another.

We found four meaningful differences in the mental landscapes of consumers across the two  countries2. These include: 1. thoughts, concerns and perceptions about community  and social relationships; 2. perceptions  about  the  role  of fate;  3. scepticism toward sustainability; and 4. sustainability  as a social signal.

First,  the informants  in our study differed  in terms of their community role or sense of belonging to a community  and its impact on sustainable consumption.  Many  Indian informants   cited  the importance  of strong  social  ties  in motivating  or controlling behaviour. Moreover, the strength of these immediate   ties  was often  described  as a hindrance to sustainable practices.  Several informants felt that because Indians  typically  have ver y strong ties to their immediate  family and friends, they do not perceive a need  or desire to extend beyond their immediate circle  and engage in actions that support the greater good of mankind.

While  this  finding  was not unexpected, India being  classified  as a collectivistic, interdependent culture, what we initially found to be counterintuitive was that Indians cited their close-knit relationships as a barrier to adopting sustainable consumption patterns, particularly in the realm of social sustainability.  This apparent contradiction  – that on the one hand Indians appear to be more connected with  one another and on the other hand display a lower degree of concern for the greater good of society – can be resolved if we consider the collectivistic nature of Indian society. While  Indians generally exhibit  a strong desire to belong to the larger social fabric of the countr y, they also  act  in ways that  specifically  benefit  members of their own  in-group.  This  frequently  leads to a competitive  relationship  across members of different in-groups, such that increased cooperation is obser ved within  a particular group so as to advance the relative position of that group over others.

Many  people  felt that  given the  historically fragmented  nature   of Indian culture,   people  in India maintain  an  affinity   toward  their localised identities and that this micro-level identification drives sustainable behaviour. For example, several informants reported buying goods that were either made in their  local states or made by people of similar ethnic backgrounds – this  was a means  of showing support for their community.

India’s unique histor y informs the role of familial ties. Until  fairly recently, India was not a consolidated nation;  it  was  a collection    of several different ethnically and culturally  diverse kingdoms. Only after the British  regime were these culturally distinct kingdoms unified as one nation. Nevertheless,  a high  degree  of cultural diversity and cultural independence prevails  among  the   different   regions of India.  The fragmentation of Indian society   into  different heterogeneous groups,  coupled  with the  collectivistic nature of Indians, helps explain the strong   in-group    biases  we   observed among  our Indian  informants.  Indians appear to foster  stronger  biases toward their more  narrowly  constructed  in- groups, which seem to be formed at the level  of regional (rather than national) similarities and at the level of kinship. As our informants  revealed, this resulted in an extreme in-group  bias at the level of familial or regional identification,   such that Indians appeared to extend  a great deal of support to sustainable initiatives if they benefitted members of these in- groups but  seemed other wise apathetic to the  social  needs  of others  and  to environmental degradation that did not directly impact them.

Conversely, Americans  tend  to be more  individualistic,  and social connections  display a different  effect. The Americans that participated in the study do not show the same strong in-group  biases that Indians exhibit and are likely to interact with and behave cooperatively  toward  the goals of even those with whom they do not maintain strong relationships. This  high  degree of individualism  translates to greater geographic mobility   and  less apprehension in interacting  with and  helping  unknown  others, as evidenced  by  the  greater  level of social concern among  our American informants  for even socially distant others.

Second, many Indian  informants  expressed a sense  of fatalism,  whereby they let their  perceived fate dictate their actions. Many individuals reported feeling that they had little  control  over events (“things happen on their own”)  and that issues of sustainability would  be resolved in the  course of nature, if that is what fate intended.  As a result, they exhibited higher   levels  of inaction  in sustainable behaviour because they  felt that fate would ultimately  dictate the  resolution  of problems   such  as environmental pollution,  overcrowding and social inequity.

Rather   than   actively  participate   in  changing the  course of environmental problems or assisting in social  issues,  many   of our Indian  informants preferred to leave the resolution  of these problems to fate.  This  fatalistic  view  of the  world seems consistent with  the fact that Indians have a relatively low preference for uncertainty   avoidance and  have a long-term  orientation  to the world. Given India’s low uncertainty  avoidance, we would expect Indians to accept the fact that the world  is not perfect.   As a result,  Indians  exhibit   a great deal of patience for unexpected events and rely on spontaneous solutions to problems rather than rigid, premeditated solutions. This is reflected in what researchers and practitioners have documented   as the “jugaad” effect, that is, the tendency for Indians to use spontaneous  problem- solving   skills,   such  as  trial-and-error,   rather  than more dogmatic methods of problem solving. In this sense, Indians  tend  to deal  with problems   as they arise, rather than spend too much time anticipating and worr ying about future problems.

Third, the  participants  differed  in the  extent to which  they exhibited  scepticism regarding sustainability. American informants believed that their actions  mattered,   and  as a  result,   felt some personal responsibility for behaving sustainably. There was only  a small minority of individuals who felt that their actions were minuscule relative to the challenge.

Indians, on the other hand, were generally sceptical about  the  actual impact  their actions  would  have. Indian informants doubted whether organisations that purported to be sustainable were truly behaving in such a way, a view  that  is perhaps  rooted  in the cultural  evolution  of the  countr y.  Many   people described  this  sense of mistrust   as emanating  from their day-to-day experiences, where they felt generally suspicious about their interactions in the marketplace. Consequently, they expected more transparency in the process and more proof that sustainable organisations were in fact living up to their promises. In the absence of such evidence, informants  appeared doubtful that another  person would  actually take the steps necessary to make a process sustainable.

Compared   to  the   US,   India has   a   higher degree of inequality  and an uneven distribution   of power. Americans place an emphasis on the equal distribution  of power  and  control.   Societies with greater levels of inequality  are often characterised by higher levels of corruption  and distrust toward legal and government authorities.  This tends to result in a weak understanding   of the motives of others and aggravates  their sense  of perceived  unfairness  and scepticism  regarding  motivations.  Our findings suggest that Indian informants exhibited such strong scepticism toward  sustainable initiatives  because they  doubted  the  motives  and  behaviours of the sponsoring organisations. As a result, we repeatedly heard our informants demanding more transparency and proof of the sustainable efforts that organisations and  individuals  claimed  to be  undertaking.  Thus, our finding  that  Indian informants  were  highly sceptical of the motivations of companies  engaging in sustainable production  and those that claimed to utilise  a sustainable ecology seems consistent.

Finally,  perhaps the  biggest difference  between Indian and  American  informants   was  that   the former  felt people used the idea of sustainability   as a means  to signal to others that one is a “good”   or “responsible”  person, without  a real concern for the issues. According  to many of our Indian informants, engaging  in sustainable consumption  elevated the perceived social status of others. Informants described social comparison   as an important  aspect of Indian culture,  where individual  members showed a high degree of concern for what other members of society thought of them.  While  few American informants cited  sustainability   as a source  of social signalling, they did not cite conspicuous sustainable purchasing as indicative of desirable personal traits.

While Indians generally exhibit a strong desire to belong to the larger social fabric of the country, they also act in ways that specifically benefit members of their own in- group.

Interestingly,    some   Indian informants    and a   minority of American  informants  agreed that sustainability   is  a  source  of emotional  dissonance, arousing  a sense of guilt. These individuals reported a sense of shame when organisations highlighted the sustainable practices that were utilised to manufacture a product or orchestrate a ser vice. While sustainability itself  was not the source of emotional conflict,  the dissonance arose when  organisations prominently highlighted the sustainability of a product  or ser vice that  was meant  to be  used primarily   for hedonic gratification, including those that fell under the realm of luxur y  offerings.   Individuals   disclosed  that  in such situations,  where the motivation  was pleasure, they would  have preferred  the sustainable practices to be less conspicuous.  In a sense, people  felt that sustainability dampened the joy they derived from other wise hedonic experiences. 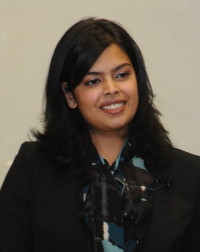 Assistant Professor of Marketing at the Indian School of Business (ISB).